Be the first person to build a castle in one’s own color.

All the cards are placed face down in the center of the table. In each turn the players must always take at least one card from the top of this draw pile.

If a player picks up a ‘castle’ card, she places it in front of her, marking the beginning of a castle in the color of that particular card. If another player is already building a castle in that color, the player must place the card face up on her right-hand side. These cards can be discarded or sold later in the game. After having picked up a castle card, the player may take yet another card from the pile, or pass her turn.

If a player picks up a ‘fairy’ or a ‘diamond’ card, it also has to be placed face up on the player’s right-hand side. As with a castle card another card may be taken from the pile after having picked up a fairy card, or the turn may be passed.

If a player picks up a ‘witch’ card it’s bad luck! Then a player must place the witch card, and 3 other cards next to the pile of cards in the center of the table and pass her turn. The 3 other cards can be diamond cards or castle cards, either from the player’s right-hand side pile or from her own castle. If a player has less then 3 cards, she must hand in whatever cards she has.
A fairy card can be used to counter the witch card. If countered, both the witch card and the fairy card must be placed on the pile next to the cards in the center of the table.

Whenever there are no more cards left in the pile, all the cards that are next to the pile are taken, shuffled and placed back in the center of the table to form a new draw pile.

The player who manages to build her own castle completely (6 cards of the same color) wins the game. 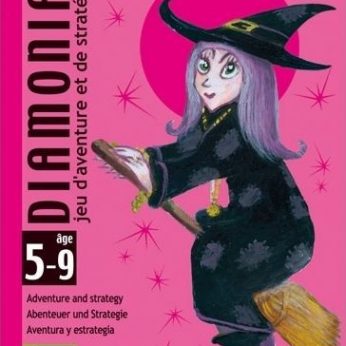