Fallout is a post-nuclear adventure board game for one to four players, based on the hit video game series by Bethesda Softworks.

Survivors begin the game on the edge of an unexplored landscape, uncertain of what awaits them in this unfamiliar world.

Each player must explore the hidden map, fight ferocious enemies, and build the skills of their survivor, as they attempt to complete challenging quests and balance feuding factions within the game.

Includes four scenarios based on the storylines of Bethesda’s Fallout 3 and Fallout 4 video games.

Players continue resolving rounds in this way until a player achieves enough influence to claim victory or one of the factions in the scenario reaches the end of the power track.

Who comes out ahead will depend on how keenly and aggressively each player ventures through the game. However, if a single faction is pushed to power too quickly, the wasteland will be taken for their own, and the survivors conquered along with it. 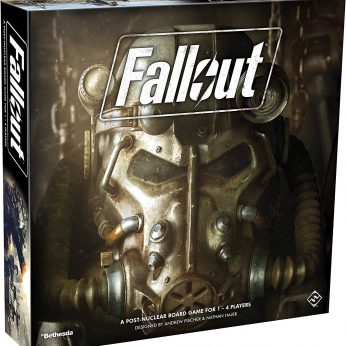